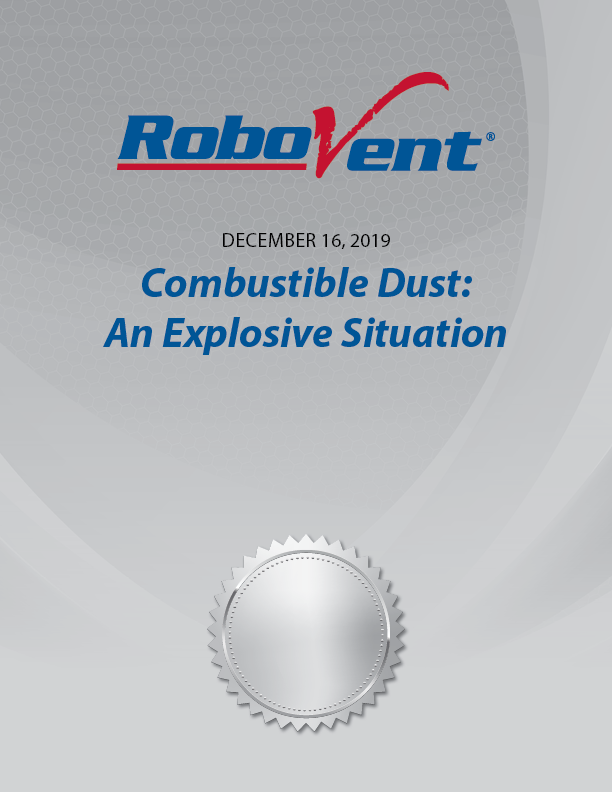 Combustible dust is one of the biggest hazards confronting a wide variety of industries.

And the one thing they all had in common is they could have been prevented.

What is Combustible Dust?

Combustible dust is a collection of fine, solid particles which, either from a single source or in a mixture with other materials, are liable to catch fire or explode upon ignition when dispersed in the air. Ignition can come from a totally unexpected source. For example, superfine iron dust from a steel shop collected on a filter will spark each time it is hit by a raindrop.

The National Fire Protection Agency (NFPA) defines combustible dust as “any finely divided solid material that is 420 microns or smaller in diameter and presents a fire or explosion hazard when dispersed and ignited in air.” OSHA has created a chart of combustible dust types.  If your dust is on that list, then you need to be concerned about combustible dust.

Not all combustible dust is the same. Each type of dust is assigned a Kst value, which provides an indication of the severity of an explosion resulting from the ignition of that dust in a confined space. Some materials, like cornstarch (208 Kst), are identified as extremely hazardous with a high Kst value. They explode quickly, creating a lot of pressure in seconds. Other products, like coffee creamer (28 Kst), burn more slowly, so the pressure rise is slower. But an explosion may still result.

The Kst value—also called the deflagration index, measuring the relative severity of the explosion—is determined by several factors, including the size and chemical nature of your particulates, along with their moisture level. The larger the Kst value, the stronger the possible explosion. A Kst value of 0 will result in no explosion. A value over 0 and below 200 could result in a “weak explosion.” A value between 200 and 300 could result in a “strong explosion.” These substances might include cellulose or flour. A value over 300 could see a “very strong explosion.” These materials might include aluminum or magnesium dust.

The 5 Elements of a Dust Explosion

There are five required elements for a dust explosion. They are sometimes referred to as the Dust Explosion Pentagon.

A term often used in connection with dust fires and explosions is ‘deflagration,’ which is defined as combustion which propagates through a gas or across the surface of an explosive at subsonic speeds, driven by the transfer of heat. The term is used for both flash fires and explosions. With a dispersed dust cloud, deflagration can cause an unconfined flash fire or, when confined, an explosion that ruptures the containment vessel.

Combustible dust explosions often involve two explosions: primary and secondary. The primary explosion is the first to occur when dust suspension in a confined space is ignited and explodes. The first explosion will dislodge other dust that has accumulated, which, when airborne, also ignites. A secondary dust explosion is often more destructive than the primary one.

For all the harm that dust fires and explosions can cause, prevention and mitigation together can all but eliminate the risks to your business.

Explosion prevention begins when one piece of the Dust Explosion Pentagon is removed.

Explosion mitigation includes steps to protect workers, equipment or the environment from a combustible dust incident or incident sequence. Mitigation reduces the impact or damage from an explosion after the incipient stages have already begun.

Testing is necessary to know both if combustible dust is present in your business and what type of dust it is so that appropriate safety measures can be taken. A Dust Hazard Analysis (DHA) is a systematic review that will identify the potential for a fire, flash fire or explosion hazards associated with combustible particulate solids arising from processes in your facilities.

Components of a DHA

There are five critical elements to a thorough Dust Hazard Analysis:

Methodology is important, but there isn’t a specific process that works for every analysis. Frequently it’s a combination of methodologies. One of the most common, and successful, is node-based methodology.

A node can be defined as an environment that has both oxygen and a combustible dust present. A site may have only one such node or it may have nodes reaching into the hundreds. A thorough Dust Hazard Analysis samples each one of these nodes looking for a credible ignition source and a dust concentration level that would support a combustible dust event. This process is greatly assisted when the client has existing Process and Instrumentation Diagrams (P&IDs) or process flow diagrams.

The second critical element to a DHA is material characterization: listing materials being handled and characterizing them in terms of combustible dust parameters such as maximal pressure (PMax) and rate of pressure rise. The list of materials needs to include manufacturers’ names, where the materials came from and how they’re received.

In the food industry, there are products like flour, sugars and starches whose parameters are well known. In the furniture handling industry, material could be anything from particleboard to a hybrid of wood and plastic. A proper DHA will take samples from the various nodes and decide whether a product needs to be tested further or whether the published data is sufficient to make a risk determination.

Process characterization involves a variety of steps, including looking at the different nodes, the dust concentration levels that may be present, and the possibility of ignition sources in the different parts of the processes.

It should certainly include a site visit and thorough documentation of every part of the process that is handling combustible dust. The inspector then takes that information and closely examines the credible ignition sources for all those areas.

In the end, the DHA needs to be more than a mere collection of generalized safety concepts. It must contain concrete information that spells out specific threats and identifies either a mitigation or consistent control strategy.

The language needs to be clear and simple. Information should be condensed and put into a format that is readable by everyone from the production manager and workers in the plant to the engineering manager, plant manager, and even the director of the Environmental Health and Safety Group. The report should have as its goal uniting everyone in a team effort to make the facility safer.

One aspect of a thorough DHA is an examination of housekeeping practices. In some cases, combustible dust may be building on ledges, building columns, building joists and above false ceilings.

Preventative maintenance recommendations should be a part of the final report. Preventative maintenance could reference filter bag changes on a dust collector or checking bearings on rotating equipment like screw conveyors, bucket elevators, rotary valves and grinding systems. Any one of these can be an ignition source for combustible dust.

Both the Occupational Safety and Health Administration (OSHA) and the National Fire Protection Association (NFPA) have standards for combustible dust that manufacturers must follow.

NFPA 654, the Standard for the Prevention of Fire and Dust Explosions from the Manufacturing, Processing and Handling of Combustible Particulate Solids, outlines best practices for preventing dust explosions. Dust collection systems for combustible dusts must also meet NFPA 68, Standard of Explosion Protection by Deflagration Venting, and NFPA 69, Standard on Explosion Preventing Systems. As of September 2020, manufacturers must complete a Dust Hazard Analysis (DHA) of their facility per NFPA Standard 652. This standard provides the basic principles and requirements for identifying and managing the fire and explosion hazards of combustible dusts and particulate solids.

We understand combustible dust standards and guidelines and how to meet them, making your facility safer for you and your employees. RoboVent has set the benchmarks in the industrial ventilation industry due to cutting-edge technology and completely integrated solutions. Together, let’s create a Combustible Dust control strategy for your facility.

Contact RoboVent today to learn more about our innovative systems, processes and approach.