Odor control can be a serious challenge for many industries. While solutions for airborne dust and particulates are fairly straightforward, odors can be harder to track down and capture. Odor and pollution control require specialized solutions such as molecular filtration using activated carbon.

Noxious odors are a result of chemical molecules that are light enough to diffuse through the air as gases or vapors.

Some of the most unpleasant odors come from volatile organic compounds (VOCs), a large group of light carbon-based molecules that react with the atmosphere. These include benzene, ethylene glycol, formaldehyde, methylene chloride, tetrachloroethylene, toluene, xylene, and 1,3-butadiene, which are found in many consumer and industrial products. Because of their volatility, these molecules off-gas (or out-gas) into the environment, creating unpleasant smells as well as chemical exposure concerns. Sulfuric compounds (such as hydrogen sulfide and sulfur dioxide) are also well-known olfactory offenders. “Natural” organic materials—such as foods, plant-based materials, animal products and manure—are the culprit for many odor problems, especially as organic materials rot and decompose.

If you have an odor control problem, the evidence is probably obvious. Odors can cause problems both inside and outside the facility. Within the facility, noxious odors create an unpleasant work environment, which can make recruiting and retention difficult. If the odors are strong enough, or the chemicals causing the odors are associated with health concerns, a stinky workplace may also be an OSHA violation. If odors are allowed to escape into the environment, companies may find themselves in violation of EPA emission regulations or local ordinances. Uncontrolled odors are also a common complaint in lawsuits filed by neighbors against polluting industries. Controlling odors is essential for both a healthy, pleasant work environment and good relationships with neighbors

Many different industries create unpleasant or unhealthy odors. Some of the industries with the biggest odor control challenges include:

The U.S. Environmental Protection Agency (EPA) does not regulate odors directly. Instead, they regulate specific chemical constituents that make up many odors. These chemicals are listed as “Hazardous Air Pollutants” under the Clean Air Act. “Odor thresholds” are defined for each chemical depending on their hazards to human health and the environment. Chemical manufacturers and other companies whose processes produce emissions that are both odiferous and hazardous will need to conform to these regulations.

Odors may be regulated more stringently at the state and local level. Many states and municipalities have “nuisance” laws that require companies to mitigate emissions and odors that are unpleasant for neighbors, even if they are not considered to be hazardous. These regulations may require companies to prevent objectionable odors from escaping beyond their property boundaries. They also provide the basis for lawsuits that may be brought by neighboring businesses or residents impacted by the odors. Companies whose processes are deemed to produce odors that prevent “safe, comfortable enjoyment” of nearby properties or public lands may be required to put environmental controls in place to mitigate the problem.

Chemical odors that are considered to be hazardous to human health will also be regulated by the Occupational Safety and Health Administration (OSHA). OSHA designates Permissible Exposure Limits (PELs) for individual chemicals, which are measured and averaged over a worker’s 8-hour shift. Manufacturers are responsible for ensuring that workers are not exposed to hazardous chemical gases and vapors in levels above the PELs. Failure to control hazardous gases and vapors in areas where workers may be exposed can result in serious fines and legal action.

Odor removal requires a different approach than dust and particulate control. Dust and solid particulates can be effectively removed by standard filtration. Even very small (sub-micron) particulates can be captured by specialized filter media. For example, a HEPA filter captures 99.97% of particles with a size of 0.3 microns, including bacteria and viruses.

Most odors are composed of even smaller molecules (0.01 micron or smaller), which are diffused into the air as a gas or vapor. Chemical pollutants and odors will not be captured by a MERV or HEPA filter. To capture these tiny molecules, we need to use molecular filtration methods, which use chemical or physical reactions to trap small molecules within the media. The most commonly used form of molecular filtration is called adsorption. Adsorption is the physical attraction of a gas or liquid molecule to a solid surface. The odor molecule is trapped by the surface through physical forces called van der Waal’s forces. (This is in contrast to absorption technologies, in which molecules are taken in and mixed evenly into an absorptive liquid.) An adsorptive filter captures and holds tiny gas and vapor molecules that flow right through standard filter media, efficiently removing odors and gases from the air.

Activated carbon is the most commonly used adsorbent material. This is a form of carbon that has been specially treated (activated) to increase the internal surface area of the material. Activated carbon contains millions of internal “micropores” that result in a structure that provides ~1,000 or more square meters of surface area per gram of material.

Activated carbon is widely available, affordable, biologically inert and safe to handle and use. It is often called the “universal adsorbent” because it can adsorb virtually any vapor or gaseous contaminant and can adsorb and retain many different chemicals at the same time. It is especially effective for organic molecules and solvents. Unlike some adsorbent materials, it does not retain moisture. These properties have made activated carbon the material of choice for a wide range of adsorption applications, including gas masks, space capsules, nuclear submarines and radioactive iodine removal for nuclear plants.

Some chemicals are more efficiently captured by other substances, which react chemically with the molecules. Specialized filters may use activated carbon impregnated with chemicals that target specific molecules. Carbon can be impregnated with materials targeted to acid gases, ammonia and amines, aldehydes, radioactive iodine, mercury and inorganic gases such as hydrogen cyanide (HCN), hydrogen sulfide (H2S), phosphine and arsine. The material used to impregnate the carbon is specific to the chemical that is targeted for collection; some of the most common include aluminum oxides, copper oxides, sulfur and potassium permanganate.

As a general rule of thumb:

Adding an activated carbon filter to the HVAC system and/or dust collector is a good first line of defense for many odor-producing processes. If the odor is not highly noxious or hazardous, this may be enough to bring odors down to acceptable levels both within the facility and in outdoor emissions.

However, highly noxious or hazardous fumes, vapors and gases will require a more aggressive approach. Processes producing noxious or hazardous odors should be contained as much as possible so vapors and gases can be collected close to their source. Containment can be achieved through hoods and enclosures or positive and negative air pressure zones, which prevent air from odor-producing processes from dispersing throughout the facility. Air within the enclosed area must be turned over at a high enough rate to capture odors as they are produced. Especially noxious processes may require a high air turnover rate and multi-stage filter.

RoboVent can work with you to design a total dust, odor and vapor control solution targeted to your needs. Our engineers can help you evaluate your health and regulatory risks, determine the best odor control solution and filter media for your application, and design a comprehensive air quality solution including odor containment and collection, ductwork design, and ventilation and makeup air.

Diagnosing and mitigating a serious odor problem requires an experienced air quality engineer who can get to the root of the problem and design a customized solution. Solving odor issues is not a “one size fits all” proposition. The solution will depend on many factors:

Depending on the process, hazard level and facility characteristics, the solution may include one or more of the following: 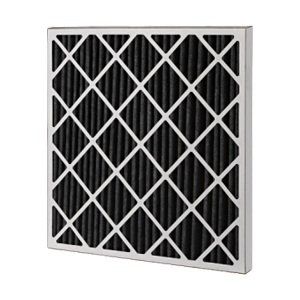 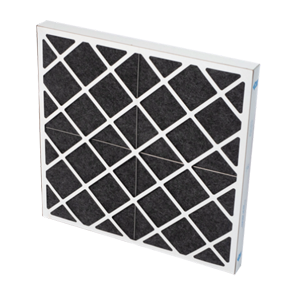 Panel air filters are loaded with granular activated carbon and other types of absorbents... 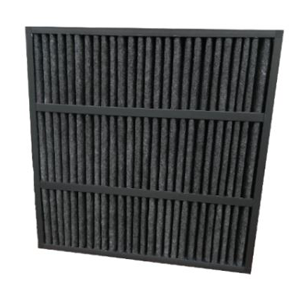 These filters are used in HVAC installations where the highest degree of air filtration is required. 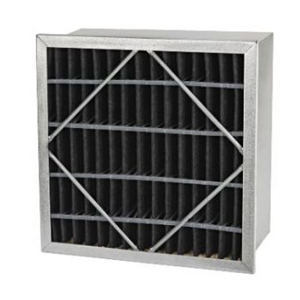 This filter style is often used as a secondary air filter or as the final filter in an air system. 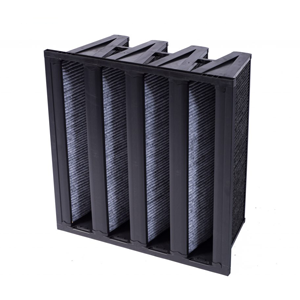 V-bank filters are used in HVAC applications as high-efficiency final filters in industrial...

GET A FILTER QUOTE