Reducing the Risk of Manganese Exposure for Welders 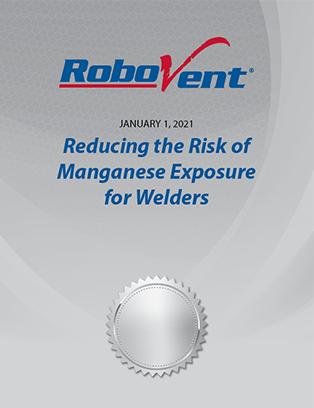 Manganese is one of the most toxic metals commonly present in weld fumes. The current Occupational Safety and Health Administration (OSHA) permissible exposure limit (PEL) for manganese is 5 mg/m3 for general industry[1]. But the American Conference of Governmental Industrial Hygienists (ACGIH) and many researchers are recommending exposure limits that are orders of magnitude lower. Here’s what manufacturers should know about the risks of manganese exposure, new recommended exposure limits and potential changes to regulation.

The Health Risks of Manganese Exposure

Manganese is a metal commonly found in steel and weld wire or rods. It is used to improve the strength, stiffness and hardness of the metal.

However, when manganese is heated during the welding process, fumed particles are released. When the welder breathes in weld smoke, these tiny particles can make their way deep into the lungs and, from there, into other body systems. This exposure can result in significant health effects, especially when welders are exposed over long periods of time.

Manganese can impact many different body systems, including the lungs, liver, kidneys, male reproductive system and central nervous system. Some of the symptoms of manganese exposure include:

Long-term exposure may result in a condition known as manganism. This disease results in neurological damage that mimics, and is often mistaken for, Parkinson’s Disease, multiple sclerosis (MS) or Lou Gehrig’s Disease (ALS). Chronic manganese exposure can also cause cognitive symptoms, including impulsivity, confusion and even psychosis.

A 2016 study by the Washington University School of Medicine in St. Louis showed that neurological effects associated with manganese exposure start at levels much lower than current OSHA PELs. These effects are both dose sensitive and progressive, meaning the higher the exposure levels, and the longer welders are exposed, the worse the effects will be[2].

While OSHA’s ceiling on manganese exposure remains set at 5 mg/m3, other scientific and regulatory bodies recommend much more stringent exposure limits. The California OSHA limit is set at 0.2 mg/m3, while the National Institute for Occupational Safety and Health recommends a PEL of 1 mg/m3.

Based on recent research suggesting that neurological effects start at much lower exposure levels than previously realized, ACGIH lowered their recommended exposure limit for fumed manganese from 0.2 mg/m3 to just 0.02 mg/m3 in 2016. This recommendation represents the strictest limit as suggested by the best available science.

While OSHA does not appear to be ready to change their standards for fumed manganese in the near term, the agency recommends that manufacturers consider following the stricter guidelines provided by NIOSH or ACGIH. These recommendations do not carry the force of law. However, manufacturers following the lower recommended limits will be better protected from risks and liabilities associated with manganese exposure in weld smoke and will significantly improve the health and quality of life for their workers.

They will also be better prepared for future changes in regulatory requirements. While OSHA regulations are slower to change than ACGIH recommendations, in the long run regulations generally can be expected to catch up with the science. Manufacturers who take steps to reduce manganese exposure now will be well positioned to meet new regulations as they evolve in coming years.

The best way to reduce exposure to manganese is to reduce overall weld fume exposure. This will have the added benefit of reducing exposure to other toxic substances found in weld smoke such as beryllium, hexavalent chromium, nickel and other chemicals and heavy metals.

For robotic welding, the best remedy is to ensure that robotic weld cell enclosures are effective in keeping weld smoke out of the facility air. Keep weld cells hooded or separated from areas of the facility where humans are working and make sure that you have a dust collection system that can keep up with the volume of weld smoke that they are producing. If robotic welders cannot be hooded or enclosed, an ambient air filtration system should be used to collect weld smoke and return clean, filtered air to the facility. Robotic tip extraction can also be used for some applications to collect weld fumes as they are produced.

Metalworking shops engaged in manual welding should have effective source capture systems that keep weld smoke out of the welder’s breathing zone. These could include:

Depending on the capture efficiency of the source capture system, manufacturers may also want to have a secondary ambient air filtration system to collect remaining weld fumes.

Engineering controls, including source capture and ambient filtration, are the first line of defense for weld fume exposure. If these controls cannot bring exposure levels down far enough—perhaps due to the specific processes or materials being used, the types of weldments or the layout of the facility—manufacturers should provide workers exposed to high levels of manganese with personal protective equipment (PPE) such as a powered air purifying respirator (PAPR) system.

What Manufacturers Should Do Now

Manufacturers concerned about exposure to manganese in weld fumes should start with an air quality evaluation to determine what their current exposure levels are. This should include measurement of manganese levels both in the general facility air and in the welder’s breathing zone.

An air quality evaluation may include dust concentration meters set up at different points in the facility to measure total particulate levels. Chemical analysis of collected particulates can allow calculation of exposure levels for specific elements such as manganese. Industrial hygienists may also be able to extrapolate the manganese content of weld fumes based on the materials and processes that are used in the facility. Evaluation of exposure levels for individual workers can be done using personal sampling methods, which rely on wearable filters that collect fumes in the breathing zone.