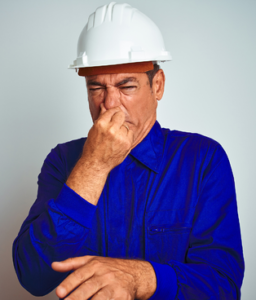 Are you dealing with noxious smells and odors on top of dust and fumes? You’re not alone. Many industries—such as recycling and waste material handling, chemical and plastic production, pulp and paper processing, seed conditioning and cannabis operations—have odor control challenges. Companies may think of dust control and odor control as separate issues. However, with activated carbon after-filters, the dust collector may be able to tackle odors, smells, smoke, vapors and gases along with solid particulate.

RoboVent Senturion, RoboVent’s flagship dust collector, can be equipped with activated carbon after-filters to tackle both dust and odors at the same time. By leveraging the dust collector for integrated smoke, odor, vapor and gas control, companies can save on equipment costs and space while providing a pleasant and safe work environment and complying with clean air regulations. Your RoboVent representative can tell you whether integrated dust collection and odor control is right for your process.

What Exactly Are Smells and Odors?

What smells? Odors are created by molecules of a substance that mix with the air. When we breathe them in, olfactory receptors in our noses detect the molecule and send a signal to the brain, which we interpret as a smell.

Many odors are made up of dozens or hundreds of individual molecular components. These may exist as gases, vapors or aerosolized liquids that diffuse through the air. The more volatile a substance is, the more likely it is that molecules will mix with the air. If the result is pleasant, we may call it a fragrance or aroma—like perfume, spices or the smell of freshly baked bread. Other scents, such as sewer gas or ammonia, are classified as noxious odors. But in an enclosed area, even scents that are considered pleasant in small amounts can quickly become overwhelming.

Common odor-creating substances in industry include:

Why Smells and Odors are Bad for Business

Bad smells and noxious odors aren’t just a nuisance. They are bad for the bottom line—and can get companies in big trouble.

Some odors (especially chemical odors) are health hazards; many odiferous compounds are also carcinogenic or cause other diseases, such as COPD, kidney disease or nervous system disorders. But even smells that do not present known long-term health risks can cause problems for workers. Strong smells can cause nausea, headaches and migraines, dizziness and trouble concentrating. Companies with smelly workplaces are likely to have more trouble attracting and retaining talent.

They may also face complaints from neighbors in the community or even legal sanctions for allowing odors to escape the premises. Nobody wants to live or work next to a business emitting noxious odors.

In the U.S., odors are generally not regulated directly at the Federal level. However, companies must comply with both Environmental Protection Agency (EPA) and Occupational Health and Safety Administration (OSHA) regulations related to specific substances that may be present in their odors.

How do you control odors, smoke, vapors and gases created by industrial processes? Some industries and processes may require separate specialized odor abatement solutions, such as wet scrubbers. However, in many cases, it is possible to add after-filters to the dust collector. An activated carbon after-filter allows the dust collector to be leveraged to control odors, vapors and gases along with solid particulate.

Filter media in a dust collector cartridge is optimized for the collection of solid particulate. Odor-producing molecules, which are typically in a vapor or gas phase, pass right through the filter media. A secondary form of filtration must be added to the dust collector to collect gaseous or vaporized substances.

An activated carbon after-filter can remove a broad range of odor-producing substances, including VOCs, sulfides and PAHs. It can also remove many vapors and aerosols and the fine smoke created by combustion of petroleum-based fuels. Activated carbon works by a process called adsorption, in which molecules are attracted to the surface of a material and become trapped by chemical or physical forces. The activated carbon filter contains millions of micropores to increase the available surface for adsorption.

For integrated odor and dust control, we recommend RoboVent Senturion: a powerful, modular industrial dust collector that can be easily adapted with HEPA or activated carbon after-filters. The after-filter sits after the filter chamber as a secondary level of filtration before air is exhausted back into the facility or to the outdoors. Adding secondary activated carbon filtration removes most tough odors, gases, vapors and fine smoke from the air, creating a more comfortable work environment and preventing noxious smells from escaping into the neighborhood. We have successfully applied this after-filtration method for companies in the recycling, waste material handling, chemical and plastic industries, among others.

Talk to us about activated carbon after-filters for integrated dust, odor, smoke, gas and vapor control. Our clean air solution experts can help you decide whether this is the right approach for your facility.