Altec in St. Joseph, Missouri wanted to eliminate haze in their plant. “At some points in the winter, we could see a heavy haze across the shop,” says Pat Francis, production supervisor in charge of solving a solution to the problem. “The health and safety of our associates is of great importance to us,” said Francis. “We wanted to make sure our facility dealt with this weld smoke in such away that would protect our associates and not compromise our productivity.” 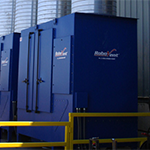 Altec is a leading manufacturer of mobile hydraulic equipment, including cranes and cherry pickers. Employing over 1,000 people, they are privately owned and have been in business for over 50 years.

Altec realized they couldn't use source capture at the weld point effectively, since the parts they are manufacturing are too large. With overhead cranes, there would be no simple way of ducting down to the weld point. Fume arms were out of the question since they are cumbersome. Altec had no choice but to use a Full Plant Ambient System which re-circulates air in the general plant and filters it. Altec performed intense research on air-filtration options. Ultimately, the company selected the RoboVent FMA System from RoboVent Product Group because of the system's overall design and layout. “FMA” stands for “Filtered Make-up Air,” as that is what the system ultimately replaces.

The selection process was a relatively short one for Francis. Altec decided to install the RoboVent FMA System as a complete plant ventilation system because of its overall design, especially the design of the vertical filters in the RoboVent collectors and the layout of the overall system.

“There were other comparable products that we researched,” Francis said. “However, it quickly became apparent to us that the layout of the system not as effective and the overall design of theses systems did not meet our high level of expectation.”

Another benefit was that Altec was able to schedule the installation of the RoboVent System during off-hours so production was not negatively impacted.

In addition, Altec has also taken advantage of the maintenance plan RoboVent offers for the system. Each quarter, RoboVent provides maintenance as needed, and once a year the company changes the filters. 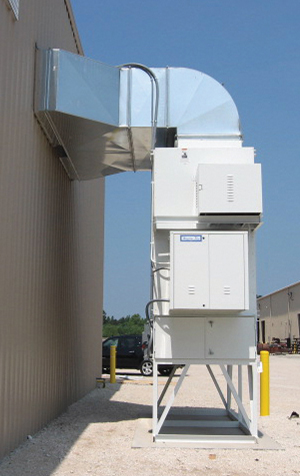 Combat negative pressure created by some industrial ventilation systems. Most factories require some fresh air to replace process gases that are being exhausted. Make-up air systems allow air to be brought back into your facility and heated to the desired temperatures, even during the coldest months of the year. This will overcome the common problem of negative pressure in a facility.

“This system is so clean,” said Francis. “It allows for a better working environment for our employees and needs little attention. But, maybe even more importantly, there has been a positive change in employee morale since the system was installed.”

Francis is very pleased with the ease of installation and how effectively the RoboVent System works. He also praised RoboVent and their associates because they were easy to work with and were able to meet Altec's ventilation needs with a complete, effective system.