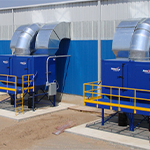 John Deere manufactures off-road vehicles for many industries including agriculture, construction, forestry, consumer and turf management. This manufacturing process includes a lot of welding in many plants throughout the John Deere company.

Bruce Davis, a senior engineer with John Deere's facilities and engineering group, has been involved with the company's air filtration, dust collection and fume control since 1981.

“Our company has always been concerned about weld fumes in our facilities,” said Davis. “We have always taken precautions to keep our employees safe and healthy and have consistently been within OSHA limits. However, in 1990, the Occupational Safety and Health Association (OSHA) changed the amount of allowable weld fumes from ten milligrams per cubic meter to five. This is when I became very interested in not only adhering to the level but beating it.”

Under Davis' direction, an overall approach was developed to look at how to improve air-filtration company-wide, taking into consideration the diverse welding methods, plant layouts and ventilation systems used at all John Deere plants. 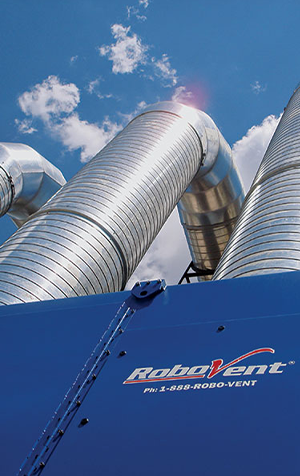 RoboVent has pushed air filtration technology to a new level with the Fusion™ Series. Building on decades of experience and innovation, RoboVent has created a dust collector that is more capable, more powerful and yet simpler. The Fusion Series brings together all of these breakthroughs into one distinctly unique product platform.

“Some of our plants had a very classic manufacturing plan, inefficient for the best air filtration,” said Davis.

A four-pronged approach was developed to determine how to upgrade the company's air-filtration systems:

• Reduce the amount of fumes being produced by examining the welding process (found ways to keep oil off parts that were going to the weld machine)
• Capture the fumes at the sources and filter the air
• If capturing wasn't an option, determine how to clean the air in the entire building and recycle it
• Increase ventilation throughout the entire building

While the company was moving through this planning process, they also were faced with a unique challenge at one of their locations – how to efficiently and effectively vent an entire building that was being used as a weld booth. This building was the site for dirty air testing, in which the company, by using chafe oat bran, creates real life situations to test its products' radiators and heat-transfer equipment. This testing created an extreme amount of smoke and a solution was needed quickly. Because of all these factors, John Deere realized it needed an air-filtration system set up on the roof of the building.

Davis was already working on developing a dust collector that he wanted to have built when he came across the RoboVent system during his research. Davis was able to see the fans, connecting ductwork and other filtration gear with which he was familiar. However, RoboVent put all this into a single package, which was exactly what Davis was looking for in a fume collector.

Currently, John Deere has installed four of these systems and plans to install over 20 more throughout the company's manufacturing plants. Some of these air-filtration systems will be located inside the manufacturing facility, most likely overhead. In addition, John Deere will also test RoboVent's air-filtration units that are designed to attach directly to a welding robot unit.

John Deere has seen an improvement even with just the four systems installed.

“We have manufacturing facilities that are so clean and well-maintained in terms of the ventilation,” said Davis. “Because there is no smoky air, it is much easier to keep the facilities clean.”

According to Davis, productivity increased because employees are happy to be in such a clean and well-maintained facility.

And because this air-filtration system was being installed on the roof, there was no downtime for the manufacturing facility.

Before John Deere was aware of the RoboVent air-filtration system, the company had been thinking about duplicating an existing system but had concerns because the existing system would be too big and bulky for the roof and could cause some safety issues with drifting snow in the winter.

“RoboVent has a clean and compact design with the fans contained within the unit,” said Davis. “We were approached by another air-filtration manufacturer, but it was clear that their system was not as compact as what we needed and RoboVent offered.”

Another reason Davis wanted to implement the RoboVent solution was because he wanted to use true downflow dust collector technology to minimize the cost of purchasing new filters all the time.

“We selected the RoboVent product because of how compact it is,” said Davis. “Because of the size, the company was able to cut costs in terms of ductwork. We were also able to install the unit on a smaller surface than we initially thought.”

RoboVent was also able to accommodate a shortened manufacturing and delivery deadline.

“We wanted to get these systems in very quickly,” said Davis. “We were very impressed with how quickly RoboVent was able to deliver our units.”

Davis is very pleased with the success the new air-filtration system has provided within the John Deere manufacturing facility. RoboVent has helped the company provide a healthier working environment for its employees while continuing to adhere to and exceed OSHA standards for smoke ventilation.

“We are pleased to have exceeded OSHA standards for air filtration,” Davis said. “And we are pleased that RoboVent has provided such flexible service and support that allowed us to obtain and install the units faster than anticipated.”